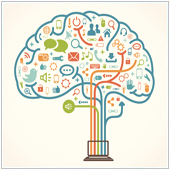 Virtualization is the act of moving a physical component or bit of software from a physical environment to a digital one that’s normally delivered over a network. This technology has become one of the most sought after tech improvements of the past decade, especially among small- to medium-sized businesses (SMBs). The only problem is, virtualization can be complicated, not to mention confusing because of its esoteric terminology. To make things easier, check out this glossary of 10 common virtualization terms.

You will often hear virtualization experts discuss the term VM. What they are talking about is the virtual machine. VMs are essentially virtual representations of the computer on your desk. They can do everything a physical machine does, only everything is virtual and usually delivered over a network connection.

Because VMs are software-based, you can often run more than one VM on the same physical machine. This could be two separate versions of Windows running at the same time, or even running a different operating system (OS), say Windows on your MacBook.

A virtual server is a specific type of VM running in a virtual environment. A common setup many offices use is to have one physical server on-site. This server hosts separate virtual servers that, in turn, host different services like email, networking, and storage, among others.

Other businesses choose to rely completely on virtual servers. This is where another company hosts the servers delivered to you over the internet. This way, virtual servers appear to be present on the network just like physical ones.

Much like the virtual server, the virtual desktop is a specific type of VM. In this case, it is a virtually delivered version of an operating system like Windows, Linux, or even macOS.

Since the advent of virtual desktops, the idea that companies have to limit a machine to its OS has become irrelevant. For example, if you own a Mac and need to access a Windows-based program, you could set up a virtual desktop that runs Windows.

The hypervisor is essentially a small OS that enables virtualization. It takes physical hardware resources and combines them into a platform delivered virtually to one or many users.

The host system, also referred to as the parent, is where the physical hardware and software are installed. These physical components are then copied by the hypervisor and delivered in a virtual state to the user. If you are creating a virtual desktop environment, then the host system will have the desktop’s OS installed on it, along with the necessary software.

The guest system, also referred to as the child, is where the VM is accessed. From the example above, the OS installed on the host machine is replicated by the hypervisor and the copy is then delivered to the user.

The user can interact with the OS just as they would with the physical host machine, because the guest system is an exact copy of the host. The guest machine, in contrast, is virtual instead of physical.

By combining a bunch of different types of VMs together into one solution such as hardware, storage, desktops, and servers, a virtual infrastructure is formed.

This is ideal for organizations looking for an entirely virtualized solution. In this setup, the whole IT infrastructure is virtualized and combined into one solution. Many companies look for a solution like this because it reduces the need for on-premises hardware, while making it easier for an IT partner to manage.

P2V, or physical-to-virtual, refers to the act of migrating a physical system to a virtual one. A common example is the merging of physical servers into a virtual environment hosted on one server.

A snapshot is an image of the state of the virtual machine at a specific point of time. This includes all of the data, configurations, and even windows or programs open at that certain moment. Snapshots are like the save button on video games — they save your progress. When you next load up the VM, your data, programs, and configurations will be right where you left them.

Snapshots are also kept in case something goes wrong with the VM. Then, you can easily revert back to an older snapshot, one that was taken before the problem occurred.

The action of taking one VM and creating an exact copy that can be used by another computer or user.

If you are looking to learn more about virtualization, contact us today to see how we can help.